Update: In 2003, HP started selling calculators branded with the HP logo, but with the design and manufacture contracted out to the Taiwanese/Chinese company Kinpo Electronics. While HP calculators are still being sold after the death of HP's calculator division, they are no longer designed in-house but instead come from an outsourced OEM/ODM. This web page remains online for historical reasons, but HP as a brand of calculators has not died and will not disappear anytime soon.

The end of HP calculators?

Many have wondered about the future of HP calculators. The last official ROM for the HP49G was released in May 2000. Aside from unofficial beta ROMs released by the developers personally, nothing new has come out at all from HP's calculator division since mid-2000.

That end seems to have arrived. As to whether HP will resume calculator development again, nobody knows. As much as I hope something new will arrive from HP someday, I wouldn't be surprised if this really is the end.

The first HP calculators were designed at the "Advanced Product Division" (APD) in Cupertino, CA, USA. For overcrowding reasons, the employees were transferred to the Corvallis, OR, USA, offices in September, 1976. Development continued in Corvallis through the HP48G/GX, which were released in 1993. After 1993, HP decided to move calculator operations to Singapore. The HP38G, released in 1995, was the result of a joint venture between HP Corvallis and HP Singapore as an attempt to help "train" the Singapore staff in calculator design. Unfortunately, Singapore did nothing on its own after this.

In November 1997, HP Australia decided to revive calculator operations. The Australian Calculator Operation (ACO) was formed. ACO scoured the HP48 user community to find the best programmers of calculator software and hired them. Jean-Yves Avenard, Gerald Squelart, and Cyrille de Brebisson, all creators of Meta Kernel, were hired directly, and Mika Heiskanen and Bernard Parisse, creators of ALG48 and Erable, respectively, contributed from outside HP. This was one of HP's last super-smart business moves -- find the best people for the job and hire them.

Although ACO initially started out small (the 48G+), they went on to redesign several older HP calculator products to reduce production cost (the 12C and 17BII, among others). Their first big project was the 49G. Other notable releases were the 39/40 and the 30S. They also worked on a number of projects which were eventually cancelled, most publicly the Xpander.

In 2000 and 2001, things really started to sour. With the Xpander cancelled just weeks before its release, the renaming of ACO to Appliance and Calculator Operation to reflect the smaller significance of calculators, and the desire from HP management to only participate in markets where HP can dominate, ACO was doomed. ACO was pretty much shut down in 2000 anyway, given the lack of anything new since then.

On November 1, 2001 (USA time), Jean-Yves and Gerald announced to the public that ACO was being shut down, effective November 9th. They only had one week notice. Below are their respective newsgroup posts.

Not a whole lot of information was shared, and there was a lot of confusion in the newsgroup as to the future of HP calculators. Basically, what I have been able to see is this:

Note that there have been reports of HP taking back supplies of calculators from stores. I don't know anything about the truth behind these rumors, but if these rumors are true, it's certainly not good. Also remember that HP had some fairly substantial rebates on its calculators in the summer of 2001.

My personal opinion is that HP died when it split off Agilent. It was really the only division left that was still innovative and still following the HP Way. All that's left of HP now is a company that makes poor quality computers and cheap (and some not-so-cheap) printers. I bet Bill Hewlett and Dave Packard are rolling in their graves right now.

Finally, in mid-November 2001, Hewlett-Packard released its official view on ACO. Notice that the president of HP's EPS doesn't even know what ACO stands/stood for! I guess this shows how much HP cared about a division that actually could innovate. Below is this release:

I wanted to take this opportunity to address several inquiries I have received from hp calculator fans regarding hp's recent closure of the Australia Calculator Organization (ACO). First of all I'd like to begin by saying that HP is not exiting the calculator business! The decision to close our office in Melbourne is a separate issue and not related to our ability to deliver calculators worldwide. This was not an easy decision to make, but the continuing tough business climate has forced hp and many companies to make painful cost reductions and to consolidate efforts wherever possible.

HP will continue to deliver calculators and remains committed to the business. The business model, channel strategy and sales and marketing activities will remain the same.

I appreciate your feedback and loyalty to the hp brand, and look forward to your continued support.

Joshua Schoolcraft forwarded me responses from two different HP employees regarding the closure of ACO. Below are the almost contradictory messages.

Sigh. Multi-paragraph responses that say what could be said in one sentence. Oh well.

Remember that HP is the only manufacturer of RPN calculators. RPN dies with HP unless we do something. As to what we can do, I have no clue. 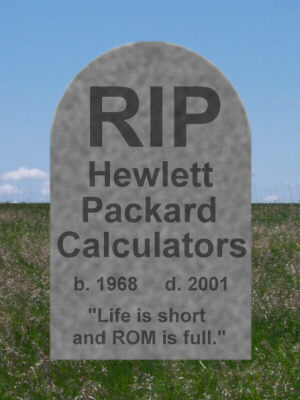