Qonos is a project being developed by Hydrix, an embedded hardware and software innovation company based in Melbourne, Australia, founded in 2002 by former HP Australian Calculator Operation employees, including Jean-Yves Avenard and Gerald Squelart (also of Meta Kernel fame).

The below image is a CAD rendering of a possible industrial design for Qonos:

Jean-Yves has been periodically releasing some specifications for Qonos onto the comp.sys.hp48 newsgroup. So far, he has provided the following information:

Display:
Grayscale 3" 320x240
Full support already exists for a color screen to be offered at a later date

In April 2005, Jean-Yves announced to the comp.sys.hp48 newsgroup that while Qonos is largely finished, with most applications and all hardware peripherals working well, it has been delayed due to manufacturing and financial problems. Once enough cash (or letters of credit) has been secured for an initial run of 5000 units, production will begin. However, at an estimated price of $350 per unit, a significant sum of funding needs to be secured.

In December 2005, Jean-Yves made another announcement to the newsgroup, stating that Qonos is indefinitely on hold. He said that financing was one reason, as Hydrix is busy with enough other projects that finding investors for Qonos wasn't able to get the time it needed, and the Intel PXA-260 series chip that was going to run it was made obsolete in October. Qonos was also designed to support the PXA-255, as seen running the prototype on this page, but the performance would be not be as good.

To help them develop a product with the widest appeal, Hydrix would like you to fill out a short survey. Accurately answering this survey will help to make Qonos the most useful product possible.

Hydrix has also released some more generic information on its web site.

The most recent renderings of the possible design (Fall 2004) are below. The actual device should be very similar to this design, though the directional buttons below the screen will almost certainly be laid out differently, as this is just an example.

Some more renderings of the earlier design (Summer 2004) are below. The two on the left show only the Qonos unit itself; the two on the right show it on the expansion sled.

A single rendering of a very early rendition of Qonos (Spring 2004) is below. 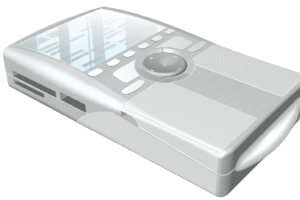 I was fortunate enough to get a chance to play with an early prototype of Qonos, and I took some pictures of it.

The photo below shows the entire prototype board. The connectors, counter-clockwise from upper left, are: audio I/O, IrDA, power, expansion sled, Vernier probe, USB, serial, Compact Flash, and SD. Also pictured, next to the CF slot, is a fingerprint reader, but it is highly unlikely this will be in the first Qonos product. Because this is a prototype, you can also find various buttons, DIP switches, and LEDs used for debugging that will not be on the final product. Although the prototype has a 3.5" color screen, the final product will initially only have a 3" grayscale screen. 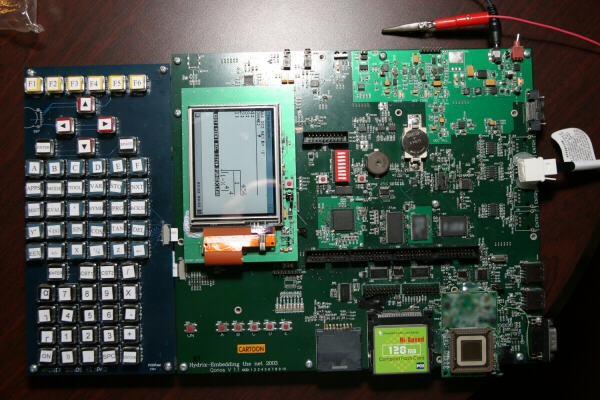 I spent a total of about an hour using the various programs on the prototype. For an early product, it was amazingly stable -- nothing crashed or gave unexpected output. Pictured below are the HP 49G emulator, the TI-89 emulator, the Vernier probe interface demonstrating a temperature probe, and the MathsExplorer application. I also tried a Vernier voltage probe, which also worked flawlessly.

The 49G emulator was very, very fast. When running on the XScale chip, everything was instantaneous. Even with this early version of the emulator it was already about 25 times the speed of a 49G.

The MathsExplorer application was also quite spectacular, even though it was still in an early state. You can draw a graph with the stylus, tell it to fit the graph to an equation, and it will give you the equation and print a new graph based on that equation. Then you can perform operations on the graph, such as translation and dilation, similar to the Trig Explorer and Quadratic Explorer aplets for the HP 38G.

It also had some of the GPE applications in it, but I didn't take any photos of them. You can see screenshots on the GPE web site.